In my last post I claimed that my expertise could be summarized by a number. That number was the number of books in my library having a title containing either the word “SQL” or the word “Data” in whole or as a part of another word. This does not however address the question of to what extent the meandering mentioned has impacted the relative breadth of the library of expertise to which I am claiming an absolute number summarizes. So to that effect I propose another phrase be typed into a certain program. This phrase will include the former as its numerator but will have a denominator such as to give us a ratio of those books I claim contribute to my expertise to books in general (specifically books narrowly defined as ISBN numbers as opposed to leaves of paper with writing on them bound together and presumably following some grammatical style apropos to the topic to which the title should presumably allude). But, alas, I digress. The phrase I think might aid in the rationalization of the aforementioned expertise which I am ascribing to myself might look something like this: 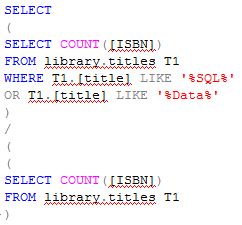