There were a number of things brought into SQL Server OVER the past few versions that tickle me in such a way as to beg the question Why haven’t we been doing that all along? One of these I only gave a brief glance when I first saw it, much to my detriment. Datetimeoffset is a positively marvelous datatype. Not only does it allow us to store date and time values together with a precision of as little as 100 nano-seconds, but it can also be used to determine if two datetimeoffset values match across time zones with zero coded date math.

Unfortunately, only the latest version of SQL Server contains the DATETIMEOFFSETFROMPARTS. I say this is unfortunate because I am writing this from a SQL 2008 R2 machine, and the example that follows could be much more demonstrative the time zone sensitivity of the datetimeoffset data type if I hadn’t commented that code out. Nevertheless, let’s look at some comparison of datetime types. 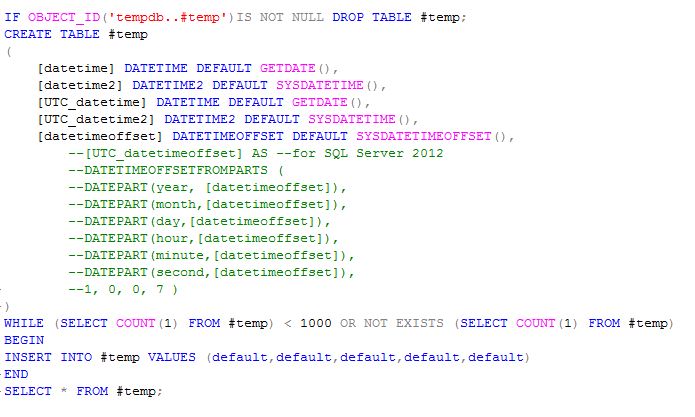 If we look at the output we can see the differences in the precision of the different datatypes. We can also see the time zone component to the datetimeoffset type. The standard date time data type cuts its digits off at the milliseconds’ place. This can be somewhat misleading in appearance. We’ll look at that later. But first let’s look at how fast these rows being written. We can also see from this result set that even at 100 nanoseconds precision we really can’t count on more precise time to uniqueify our rows. Perhaps, in a later post we’ll discuss TIMESTAMPS.

If we look closer at these values we’ll notice something. The right most digit in each and every value is limited to just a few numbers. In the case of the datetime values, I have come to understand that we can actually only capture 1/300th of a second as opposed to 1/1000th. As for the more precise data types it is unfortunate that in addition to leaving my SQL 2012 instance at work, I left my Cesium clock at the gym. That of course means, that I lack the tools to accurately determine how many nano-seconds precision we are realizing with our ability to store 100-nanoseconds.

Its getting close to 2013-12-26 20:30:10.6208135 -05:00 and I am trying to keep these posts short and too the point, in that meandering way that whets your whistle for more (I hope). Speaking of whetting your whistle, look at this version of the above with a TIMESTAMP, which is not to be confused with a TIMESTAMP.